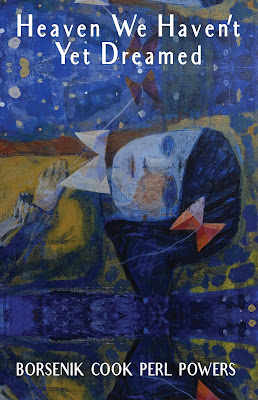 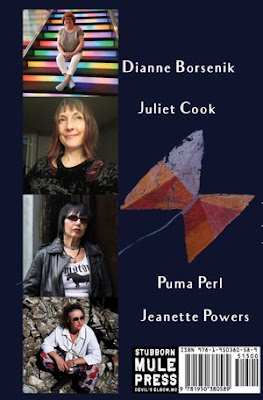 I am delighted to announce my new book, Heaven We Haven't Yet Dreamed, is published by Stubborn Mule Press!


Heaven We Haven't Yet Dreamed contains sections of 23 pages of poetry each from Dianne Borsenik, Juliet Cook, Puma Perl, and Jeanette Powers.

In Heaven We Haven't Yet Dreamed, I continue the poetry journey that began in Raga for What Comes Next (published by Stubborn Mule Press in January, 2019), with many new poems written this year specifically for this collection. I actually wrote one of them four days after the deadline for the manuscript!

Heaven We Haven't Yet Dreamed features gorgeous cover art "Alone at Night" by Amy  Scherer and superb edits by Linzi Garcia. This book is 116 pages long, and is only $15 (plus $3 for postage)! In the words of my publisher, you will be reading the works of "four radical femme poets"! Oooh, baby!


I've included the PayPal link here, and I've also posted a PayPal link on this website (right column). You can order the book directly from me, and I'll be happy to sign it for you!

I've just returned from Yellow Springs, Ohio, where I attended the Ohio Poetry Association's Sun & Moon Poetry Festival at Glen Helen Nature Preserve--the event was fabulous! We read, workshopped, and hiked our poems. Earlier this week, I also performed at the Dairy Barn in Athens, Ohio, and at Poetry Plus at Art on Madison in Lakewood. I'm honored to have several more poetry events scheduled in September, October, and November of this year. I'm taking a break from reading very far from home during December, January, and February (I do have one reading in Amherst, Ohio, in February), but I'll begin traveling again in March. I  hope you'll join me at these events to celebrate the living art of poetry!

Poetry performances on stage — Dianne Borsenik, Kelly Boyer Sagert, Debra Rose, and others to be announced.  Dianne will be reading from 2 to 2:20 p.m.

Dianne Borsenik will be reading from her two new Stubborn Mule Press books, Raga for What Comes Next, and Heaven We Haven't Yet Dreamed. Leonard Kress will also feature read. Jonie McIntire hosts this event.

Dianne Borsenik will read from her new books, Raga for What Comes Next and Heaven We Haven't Yet Dreamed.


Borderlands: Poetry on the Edge

Dianne Borsenik will read from her new Stubborn Mule Press books, Raga for What Comes Next and Heaven We Haven't Yet Dreamed. John Burroughs will read from his new Venetian Spider Press book, Rattle and Numb. Open mic will follow; light refreshments in attendance.

NightBallet Press travels to South Euclid, OH, to co-present, along with John Burroughs and Crisis Chronicles Press, a selection of NBP and CCP poets. Hear from eight poets, all with recently published books.

Bossy Grrls Pin-Up Joint
2598 N. High St.
Columbus, OHHosted by Steve Abbott & Rose M. Smith
What fun it will be to see all my Columbus area friends again at this longest-running poetry series in Ohio! I will be reading from my two new (2019) books, Raga for What Comes Next, and Heaven We Haven't Yet Dreamed...plus, I promise, some brand-new poems written just for the occasion!

Poetry and Open Mic at the Bistro

Theme: Celebration!
Dianne Borsenik will feature read from her new Stubborn Mule Press books Raga for What Comes Next and Heaven We Haven't Yet Dreamed. Open mic will follow. Hosted by Debra Rose.

Details to be announced

details to be announced
Posted by Dianne Borsenik at 11:57 AM 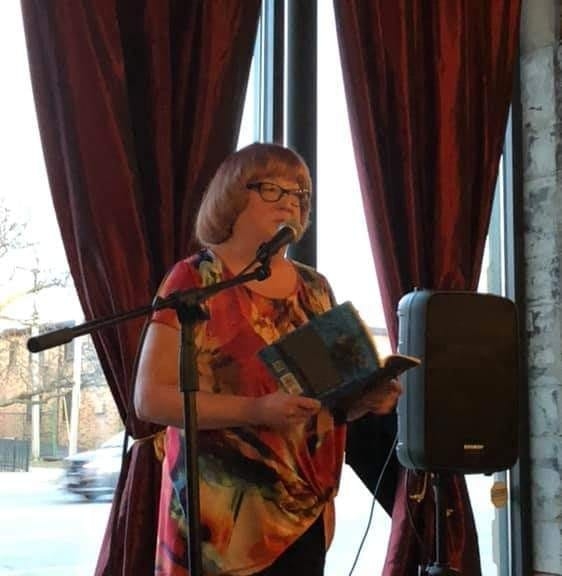 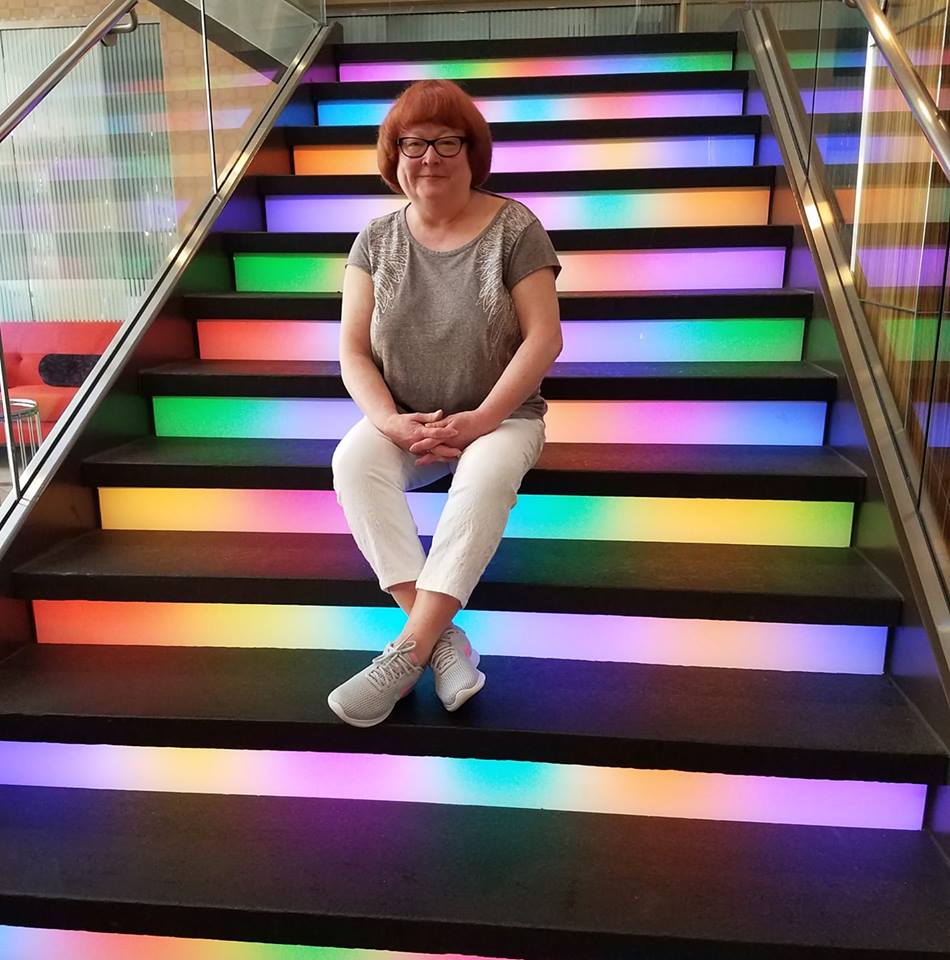 Dianne Borsenik was born Dianne Lynn Keith on Wednesday, February 2 (yes, Groundhog's Day), 1955 in Oberlin, Ohio, during a waxing gibbous moon. She is the Zodiac sign Aquarius and the Chinese Zodiac sign the Sheep. In 1959 her parents moved to Elyria, Ohio, about thirty minutes west of Cleveland, along with daughters Dianne and her younger sister. Dianne grew up roaming Cascade Park: a jewel of green trees, Black River, and East and West Falls in the heart of Elyria, and bookstores, wherever she could find them. In 1977 she met James Borsenik, and in 1979, married him. Their honeymoon was made especially exciting by Hurricane David hitting Florida while their car was sitting disabled in a Kissimmee parking lot. She kept her maiden name and added (unhyphenated) Borsenik. People the world over know her by the initials DLKB. James and Dianne have been blessed with several dog-childen over the years: Nickolas Wonder, Bahloo, and Dory Kiss Me Quick. She is still grieving her much-beloved Bodhisattva. Today, little Michel-Angelo shares hearts and home. Favorite Dianne things include Toronto, the Black Hills, Led Zeppelin (emphasis on Robert Plant), steak, lobster, shrimp cocktail, asparagus, Star Trek (emphasis on Leonard Nimoy/Spock), the Monkees (emphasis on Peter Tork), apocalyptic and disaster movies, the Weather Channel, the English Royals, reading (especially biographies, nonfiction), sleeping with the windows open, going barefoot, carnations, honeysuckle, bats (the flapping, toothy kind; bats are her totem animal), rap music (Snooooooop), riding in a convertible yeah, we're rolling with the top down, strong coffee, sweet tea, Blackstrap Rum, spicy Bloody Marys, Old Fashions made with Old Overholt Rye, the internet, getting her hands dirty growing herbs and flowers, floating in the pool, Tennessee Williams, travel, thunderstorms, Glenn Miller, Frank Sinatra, Nine Inch Nails-the Closer album, Andrea Bocelli, Devo, Ravi Shankar, the Beatles, the Doors, Pink Floyd, and of course, poetry.